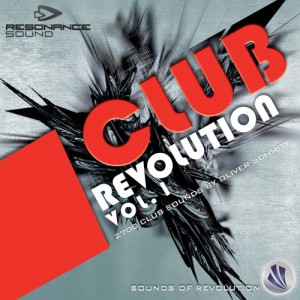 The huge variety of samples is clearly categorised into folders. Loops are provided with bpm information (140 bpm) and tonal sounds assigned to their root keys. Overall simplified access for direct use. WAV format offers all music software users endless possibilities of application. The CD is of equal interest to both PC and Mac users and includes EXS24 and Kontakt 2 files as bonus material which simplifies loading into the common (software) samplers. Each single bass/acid/synth sample has been mapped to an instrument and can instantly be played over the keyboard.

Club Revolution Vol 1 offers everything you need for the next floorfiller and will lift your production to the next level. Setting a true benchmark in terms of sound and sample quality.

Also available as a physical product: Please  contact us under info@sounds-of-revolution.com

Loop-Detail: The 575 Loops are categorised in: Electro / Tonal / Rough / Experimental und Main. You definitely won´t find any ripped drumloop where only the bassdrum is cut etc. These loops encompass the whole frequency spectrum and contain loop variations for the perfect song climax. Of course, only the required loop length was bounced – not longer 😉

Don`t forget to listen to the second demo MP3 – produced by Ernesto vs. Bastian!

Tiesto
Oliver Schmitt delivers a great sample cd: “Club Revolution Vol.1″ ! Not just loops with kicks filtered off, full spectrum! Big sounds, revolutionary and unique in it’s kind. He is one of the best sound producers we know! We’ve used several of his synthie sounds on our latest and future tracks, too. Besides that, he’s really a nice guy!”

c Gate
Club Revolution Vol.1 marks a new milestone in sound design. It´s the most inspiring sample cd I have ever encountered! CR1 is one of the rare sample archieves that comes with really new, exclusively produced material. Each groove is to be seen as an artwork on its own – programmed perfection. But even better: There are tons of unheard-of drums/electro & percussions sounds, breathtaking and really new FX stuff etc, too. Most of the time SOR keeps the content quite dry, so i can do the creative stuff – perfect! CR1 is so much better than the standard sample libraries with their boring ripped content and it rocks in ways that other developers can only dream of. Revolutionary !

Blank & Jones
After being a fan of the sound sets for Vanguard and ES 2, Sounds of Revolution delivers a new exciting Sample Collection “Club Revolution Vol.1”. Really fresh and excellent sounding samples for update club music production. It’s not like the usual collection of loops, like other CD’s, which you heard like a 1000 times. They are exclusively produced for this CD, with much love for the details. Even the kick free loops are not just low cutted, they are just programmed without the Kick, leaving the sound spectrum untouched! This gives you much more opportunities and they are fitting perfectly into your sound context. Two Thumbs up!

Ernesto vs. Bastian
The Sound Of Revolution Series are not only one of the biggest and diverse sample packages available at the moment, but most important is that they are unbelievable usable! Looking for a fresh sounding loops for EDM or any other musicstyle…you got it. Looking for a tight fitting bass sound…no problem. At the moment we are working on a couple of new Ernesto vs Bastian tracks and remixes and all we can say about that is that we used quite a bit of the massive sounds of SOR. Recommended! 5 STARS!”

ichaud
Oliver Schmitt’s Sounds of Revolutions sample packs are absolutely incredible. Fresh out of ideas? Fire up his sample packs and watch the new ideas and inspirations come flowing. Useful for all genre’s of music. I’d put it in the top 5 packs I’ve used to date 10/10″

ter Music Magazine UK
[..] This sample pack is a serious contender for the best hard dance sample pack we’ve ever heard. [..] Oliver Schmitt has done his job well, crafting over 2,700 unique samples, all of which sound wide, deep, punchy and ready for use in cutting-edge dance music.

Tech Magazine UK
The value of a good samples pack can often be judged on three things; the quality of the sounds, the amount that they inspire, and ease with which you can then incorporate the sounds into your own tracks. German sound wizard Oliver Schmitt spent nearly a year painstakingly creating all the sounds and loops for his first sample pack, Club Revolution VOL.1, which easily ticks all these boxes. […] contains a massive collection of extremely usable effects. The main samples comprise 650mb of 16bit, 44.1 WAVs. Whilst this may not match other packs recorded at 24bit resolution, it allows for twice as much content – and the sound quality is excellent. Also included are 522 patches for Kontact and EXS, which map every single sample and loop to the keyboard.

This really is a professional pack made by a producer for a producer, and this is backed up by the long list of testimonials from cutting edge artists who are fans of Oliver’s work. There’s no hand holding here either: what you get are hundreds of individual hits, sweeps and loops that you can incorporate into any style of electronic music. Oliver clearly understands exactly what kinds of sounds make up a complete dance track and has covered every single base with staggering variety. The only drawback is that, with so many quality samples on offer, you’ll find it hard to decide which ones to use.

VERDICT: An essential toolkit for anyone writing electronic music. Rating: 10/10 plus the Music Tech Excellence Award

International DJ Magazine
Using this sample set couldn’t be easier; some of its competitors should really take note! […] The simplicity of the product ist outstanding and the quality of the sounds are excellent – roll on volume two.”

Future Music UK
“One of its unique selling points is the inclusion of kick-free drum loops, a feature we’d like to see n more sample packs.”

Professional Audio
Especially impressing are the experimental- and kick-free-loops, that can be used particularly well as add-on-beats. […] The samples are not just filtered major-beats, but sound transparent and clear. Sometimes electronic sterile, then again organic warm, all frequenzy areas are being served from the lower middles to the heights. […] In addition Schmitt has got a variety of single sounds for his library in order to compose also individual beats. […]

Very good sounding sounds, that are also interesting for all kinds of genres.

Sound & Recording
…] varied, authentic and powerful produced […] Here we don`t have only menue-programs, where you can audio test the same samples via the keyboard – added are real playable programs for each single tonal sound. Considering the frame of possibilities this is real luxury. […] Club Revolution can now compete with top dog Mutekki […] Oliver Schmitt sets a course regarding the sound: His samples sound even a bit rougher and cooler than the ones of Mutekki – a good alternative or supplement. Try it out!

Beat Magazine Germany
Oliver Schmitt, mastermind behind the renowned sound forge “Sounds Of Revolution” already could make an excellent name for himself as a designer for sound supplies for Synthesizer like JP-8000, Virus or also Nordlead. Now his first Loop-CD is being awaited and promises a lot: Already when first playing the drum-, bass-, breakbeat-, synth- and effect libraries one is enthusiastic about the solid sound and the thereby high assertiveness of the material. Here one never feels just to get one more “filling material”, all loops seem to be original and perfectly conditioned. A novelty are also the contained 575 no-kick-loops! High recommendation!

Logic User
[…]programmed with much love for the details. Drumssounds or loops aren´t sampled/ripped from any other archieves.

Wusik Sound Magazine
[…] Although this CD covers a wide spectrum of electronic dance genre, the highlight of this library is the 575 kick-free loops. These serves as “top” loops that can be used to augment your main drum loops. Other worthy of mention are the juicy contents of the “Electro stuff” folder. These are full of inspirational loops to start a song. If you may say, the idea of Club Revolution Vol.1 is to interest producers in having everything in one sample library, to have a good selection of sounds in differenz formats, and a variety of electronic genres that it can serve. Club Revolution meets the above purpose and more.

© SOUNDS OF REVOLUTON - ALL RIGHTS RESERVED © 2018
We use cookies to ensure that we give you the best experience on our website. If you continue to use this site we will assume that you are happy with it.OKRead more