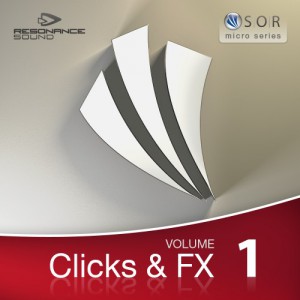 You know the story: Your next track is almost ready and you`re searching for that one sample to throw your mix into new dimensions to get the crowds pumping, but your current library of sounds lack enthusiasm?! This is where this sample pack comes into play!

SOR Clicks and FX Vol.1 will spice up any electronic music production instantly and effortlessly. Being part of SOR`s Micro Series, this selection of contemporary elements delivers loops and single sounds that will enhance your production instantly while matching seamlessly. Add sounds like trendy clicks or exceptional FX-samples to sharpen up your tracks and make them more inspiring.

All 75 click-loops have been produced with 127 BPM. In addition with 354 loopelements and 75 FX-sounds, SOR Clicks and FX Vol.1 makes the ideal solution for up-todate Minimal, Techno and Tech House tracks.

The library is delivered in a choice of established formats and therefore immediately ready to use. A particular feature of SOR Clicks and FX Vol.1 is the Loop-Elements – loop fragments, ready to be effectively triggered from your sampler to create animated effects.

Real enrichment for any groove!

Waveformless
Clicks & FX Volume 1 is the latest release from sample developers Sounds of Revolution. It’s a multi-format sample library consisting of 75 loops, 75 effects, and 354 “loop elements”. All the samples are created at a tempo of 127 BPM.

As the name suggests, the loops here all have a glitchy/clicky sound to them that suggests IDM taken in a groovier direction. That is to say, while the clicky sound design has the glitchy sound of IDM, the grooves themselves are quite head-bobbing and appropriate for use in dance-oriented styles like electro and techno. In fact, most of the loops are positively oozing with groove, making it dead easy to add interest to even the most straightforward four on the floor kick and snare combination. Of course these would be useful to IDM artists looking for a funky, driving feel as well.

The “Loop Elements” consists of hundred of individual sounds ranging from single hit percussion sounds, to “micro grooves” that consist of a part of a groove. Both can easily be arranged into your own beats or to augment the full loops provided in the set.

Finally, there is the FX section. This consists of more one-shot samples, but taken in a more complex, sound-design-y direction. The odd glitches and percussion are filtered, bit-crushed, delayed, distorted, and more to provide ear-grabbing, interesting sounds to add a dose of coolness to your rhythms.

Glitchy sounds obviously aren’t going to appeal to everyone, but this particular set would probably appeal top a wider range than many. Producers of techno, minimal, electro, tech-house and other “techy” styles of music will get the most mileage out of these for sure, but honestly, any electronic style looking to add some unusual, attention-grabbing sounds to their grooves will find something to like here. As with all their libraries, the sounds and loops are full produced and ready to drop into your arrangement as-is, making it super easy to use in addition to sounding great.

© SOUNDS OF REVOLUTON - ALL RIGHTS RESERVED © 2018
We use cookies to ensure that we give you the best experience on our website. If you continue to use this site we will assume that you are happy with it.OKRead more